By: Caged Lion
In: Lion's Journal 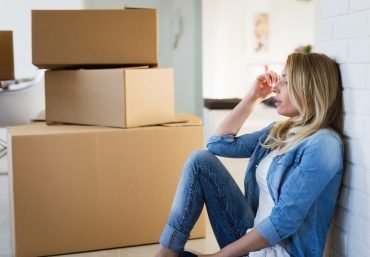 We are halfway through Unlocktober. So far this month I’ve had four orgasms. They’ve been anywhere from 2 to 4 days apart. I’m getting used to this luxurious amount of sex. I know, I shouldn’t, but I am. It’s really nice. Unpacking has been going very slowly. Mrs. Lion is exhausted and pretty much at the end of her rope. I don’t know what we can do to make it easier. Thanks to my health issues I’m pretty worthless when it comes to physical tasks. That bothers me a lot.

I’m also bothered by the reality of our sexual situation. Mrs. Lion is uninterested in sex for herself. I can’t help but feel selfish when I want sex and I know there is nothing I can do to reciprocate. This isn’t her fault. I know she is happy to do things that I want, but I really wish there was something I could do for her. I know I’m extremely lucky that she is so willing to provide me with sexual pleasure.

At times like this when so many other non-sexual demands are placed on her, it’s not surprising that she can consider my sexual needs as something that’s easily skipped for a while. It’s possible that this is simply something going on in my head and not an issue for Mrs. Lion. Meanwhile, I can’t seem to stop thinking about sex. I know, you think I always think about sex. I suppose I do, but not always the same way.

Most of the time my sexual thoughts are about the sort of sex I’ve been having with Mrs. Lion since we began male chastity. That sex is limited to hand jobs and occasional oral. That’s certainly a lot of good stuff. Most recently I’ve been thinking and writing about anal play. I’ve also been thinking about more traditional sex; you know, vaginal penetration and me providing oral attention. I’m not sure why I’m taking this trip down memory lane. I’m also not using this post to ask Mrs. Lion to change. Of course, I keep hoping she will, but if she doesn’t I’m fine. We’ve got so much going for us that it would be silly for me to obsess about what I can’t have.

Now for something completely different
It’s been over two months since I’ve been waxed. All the years of hair removal — laser, waxing, etc. — has severely reduced what grows back. As you can see in the image (left) very little is left. It bothers me to be even that hairy. I’m hoping it won’t be too long before I am waxed once more.

I am proof that consistent hair removal via wax or laser will have permanent results. After this much time, it’s unlikely that any more hair will appear. What is there will just get longer. This is gratifying in the sense that I’m not too high maintenance. If we go back to monthly waxing I can stay happily bald.

Other areas of my body, such as my stomach and chest are considerably hairier. That’s because we’ve only been removing hair there for a few months. Still, it’s nothing like it was before Mrs. Lion started waxing me. The same is true of my legs. Even though my lower legs were waxed just two or three times, there is a lot less hair growing back. My inner thighs are almost completely hairless.

What this means is that I can never go back. If for some strange reason I decide I want hair again, it won’t come back. I’m very happy with that. Prior to waxing, I had a decent amount of chest hair. My nipples weren’t particularly visible under the folliage. I think it looks much better when they are hairless.

Obviously none of this is terribly important in the scheme of things. I’m well aware of that. That doesn’t mean I’ve stopped caring. I understand that Mrs. Lion has a finite amount of energy that she can use to get things done. It’s much more important to get us unpacked and settled in. The small amount of fur that’s grown back isn’t going to get into anyone’s way. What I find interesting is that what might appear as a temporary decision (removing body hair), can easily turn into a permanent change. If I had simply shaved down there, within a month or so, I would be fully grown back. By choosing a more permanent solution, I managed to forever banish pubic hair. It’s a good thing that Mrs. Lion is okay with how I look. It’s even better that I’m completely desensitized and don’t even think about how I might look to other people.

If you don’t mind, it doesn’t matter
I’ve been to the hospital several times and medical professionals have seen my entire body. I can honestly say that I didn’t suffer a moment’s embarrassment. It wasn’t always this way. When I first began shaving, I would let the hair grow back for a month or so prior to an appointment with a doctor who might see my penis.

Similarly, I don’t feel embarrassed that Mrs. Lion is in charge. I forget exactly what context it was in, but recently I mentioned that Mrs. Lion was the boss and we got an odd look from the person I said that to. It didn’t trouble me at all. I think that one of the most important lessons I’ve learned after these years of being “different” is that it doesn’t matter what other people think. If they can’t accept me for who I am and how I live, it’s really their problem.

This doesn’t extend to advertising our sexual practices. I would no more initiate a conversation about my enforced chastity, then I would start one about the blow job I got last night. In other words, if our practices came up in a context when other sexual activities were okay to discuss, then I would feel comfortable talking about what we do. I’m not entirely sure when or if I would reveal our disciplinary relationship. I’m worried about how people who don’t practice it themselves, or at least are open to other kinds of sexuality, would react. Even here in a sex blog, we regularly get negative feedback because Mrs. Lion spanks me.

I wouldn’t mind if people we knew were aware of our Female Led Relationship with Discipline as long as I didn’t feel that we were being judged negatively. I’m proud of Mrs. Lion and the way she has taken charge. I’m not embarrassed that she is the boss. I’m also not embarrassed that she punishes me. I think it would be destructive if either of us felt ashamed of the way we live our lives. What we do works for us and works very well.