I’m Part Of The Majority Now 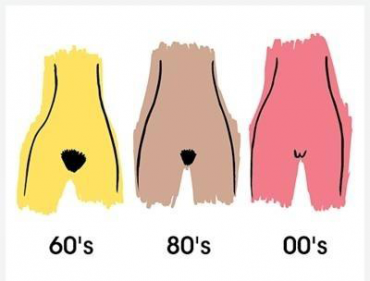 I admit it. I have definite preferences in terms of body hair. I’ve always preferred no pubic hair. Mine has been gone since the late 1980s. Even in the hairy 1970s, while I had a lot of fur down there, I much preferred women with sparse pubic hair.

Long before it became fashionable for men to remove body hair, I’ve taken some of mine off. During the 1990s I actually got laser hair removal treatments to get rid of my pubic hair permanently. Most of it is still gone, some stubbornly remains and requires Mrs. Lion to wax it.

It’s rare to see a photograph of a naked woman who still has pubic hair. It also appears that most of the male images are also sans pubic hair as well. I decided to find examples of both male and female genitals with and without hair. The image above on the left is a fair comparison of hairy and hairless male genitals. Aside from the anatomical differences between the two males (I’m the one on the right), I prefer the hairless look.

When it comes to female genitals, I absolutely prefer a bald pussy. Even though Mrs. Lion doesn’t shave hers, it’s the sole exception to that rule. External female genitalia are beautiful to me. Pubic hair only obstructs it and turns its fine definition into a fuzzy mess.

I realize that pubic hair is a personal preference. However I think it’s interesting that there have been distinct trends in both male and female body hair removal. I’ve noticed that female hair removal has always been acceptable. Even in the hairy 70s, no one blinked at a shaved pussy. That wasn’t true of men. Men without pubic hair would be prejudged as gay or effeminate.

This was true in the 90s and even the early 2000’s. I was always a little nervous about strangers seeing my lack of pubic hair. Now, it’s absolutely commonplace for men to take off the fur. I’m glad. Mrs. Lion has been waxing virtually all of my body. The only hair that she leaves in place is on my lower legs and my arms. Everything else: thighs, pubic and butt hair, chest, pits, and back are hairless.

I think it looks good. Apparently, so do a lot of other guys. You can find ads for waxing studios that offer male hair removal services that include all of the areas Mrs. Lion removes and more. It’s an increasingly popular option for guys.

It used to be believed that men who prefer women without pubic hair were nascent pedophiles. They were accused of liking the hairless look of prepubescent girls. That’s just silly. I can understand where this came from. After all, only children are naturally hairless.

There are lots of theories about why we do or don’t have hair in various places. Underarm and pubic hair are believed to perform a sexual function. The story goes that the hair in those places retain pheromones secreted with sweat. These pheromones act as attractants for potential sexual partners.

There’s some science to back that up. More than one study has been conducted where men have worn T-shirts for a period of time that allowed them to catch those underarm scents. The T-shirts were put in airtight jars. Women at various points in their menstrual cycle were asked to smell the T-shirts. Most of the time, they found the odors offensive. However, when they were at the most fertile point in their cycles, they found the same odors sexy. Presumably, the same would be true of odors produced by the genitals.

This confirms that pheromones both attract and repel. It’s supposed that pubic and underarm hair would capture and retain those smells. Given that most of us bathe every day, the odor-keeping value of that hair would be negligible.

Given that the maximum fertility part of the woman’s cycle lasts for three days or so, it probably isn’t a good idea to send armpit smell the way of a woman a man is trying to attract. Fortunately, we have less primal ways to attract one another.

Nevertheless, a lot of us have visual preferences when it comes to body hair. Mrs. Lion’s says that she’s indifferent to whether or not I have hair anywhere on my body. I prefer myself without.

I’m very glad that a lot of people understand that the presence or absence of body hair says nothing about the sexual preferences of the person. I am solidly heterosexual and I prefer myself smooth. I know gay men who are turned off by guys without body hair. They like their men hairy.