Lion’s post seems to have generated quite a few comments. I don’t mind if Lion has hair or not. I never really thought about it until I met him. And the decision was already made for me. He was, and is, hairless for the most part. There are areas the laser can’t control well so I go through every few weeks and keep the weeds down to a minimum. At this point I think it would look funny if he had fur in certain areas and not in others.

Ironically, he likes my hair. I don’t know what the situation was with other women he’s been with in the past (and I don’t care) but he didn’t like it so much when I surprised him once by shaving. I figured he’d like me with no hair since he has none. Nope. It’s just as well because I didn’t like me with no hair and I can see it being a giant pain in the ass, no pun intended, to keep it shaved. It’s a giant pain to keep pits and legs shaved.

So here we are, a hairless Lion and a hairy Mrs. Lion. It’s probably backwards by today’s standards. But then a submissive male and dominant woman aren’t necessarily the norm either. And I’ve never been known to follow and current trends. I drive a pickup, wear jeans and sneakers, hate dresses, don’t wear make up, and, if my sister is to be believed, I walk like a linebacker. Dainty!

Right now, aside from obvious anatomy, the girliest thing about me is my long hair and I just started growing my fingernails. I grew my hair because I couldn’t figure out what to do with it and I like being able to make a pony tail to get it out of my way. And Lion likes long hair so it’s stayed. Every so often I threaten to shave it all off. The fingernails I’m not sure about. I like them short but every so often I let them grow. I’ll keep them until they break, bother Lion or I just get sick of them.

Later today I’ll do a Lion inspection to see if he needs any manscaping done. I didn’t feel much fur last night when he got his orgasm, but neither of us was concentrating on hair then.

I ran an informal Twitter poll about male pubic hair. I realize the people providing answers belong to a less-than-random sample. The results are illustrative nonetheless.

Less than 20% of the men responded that they don’t groom their pubic hair. A third remove it all and nearly half groom but don’t shave it off. I am a bit surprised and glad I am not alone.

I don’t have any pubic hair. It’s been gone for over 20 years. Shortly after being divorced, I was living with a woman I had met online. It was a transitional relationship; not a good idea so soon after divorce. Anyway, prior to living with her, I trimmed my pubic hair. I didn’t have any particular reason. I just liked how it looked.

Once we were together, I stopped trimming. One Saturday afternoon, we were naked in the bedroom. She told me that she was surprised I was so hairy. She thought I naturally had little hair there. She went on to say she liked a man with less hair. She offered to shave me. I agreed. She took it all off along with upper thighs and belly hair. She started to shave under my arms, but I stopped her.

From then on, I kept the hair off. Even after we broke up I kept shaving. For a short while I let it grow back, but I didn’t like it bushy. When I met Mrs. Lion, I was hairless. Apparently, she didn’t mind. Before my rotator cuff surgery, I also got to that underarm hair. I wanted to simplify keeping clean. It’s very difficult to wash the non-surgical armpit after the surgery. The pits are growing back now. I don’t know if I will shave them again. I’ll ask Mrs. Lion how she feels about it.

My point is that the current male body hair modification trend is fairly new. If you look at pictures from the 1960’s, you’ll see that both male and female pubic hair is allowed to grow unchecked. The 70’s were the same. At some point after that, guys began manscaping. If my little survey holds true for men in general, the vast majority now remove some or all of their pubic hair.

That must mean women don’t react negatively to the manicured manscape. My guess is that most don’t care. By now it probably has no social implication to women if a man shaves or not. I’m not sure about guys. If I go to the gym and wander around the locker room nude, will other guys judge me based on my lack of pubic hair?

I’ve been to the doctor who’s seen my shaved nether regions. He didn’t react. He would have if he found it odd. I saw him when I also had a frenum piercing. He asked me how I liked it. I know he wasn’t shy.

At this point, I don’t care what people think. I like to believe I look good there. When it comes to enforced chastity, pubic hair is painful to keep. The hair catches in the device and hurts. I’m very glad I’m shaved when I wear my Jail Bird.

I do wonder what women think about male pubic grooming. If you are a female reader, could you comment and give us your opinion?

Lion does not have a poker face. If he doesn’t outright tell me by giving me the Lion weather report, he gives himself away by scooting himself closer to me on the bed. He also whimpers. And sometimes he even gives me this sideways look that I assume is supposed to be seductive. They are all designed to make me laugh. And, of course, they let me know he needs some attention, preferably an orgasm.

Yesterday, to make me laugh, he reminded me about ten times that it was punishment day. He hadn’t forgotten. He remembered. It didn’t slip his mind. Silly boy. 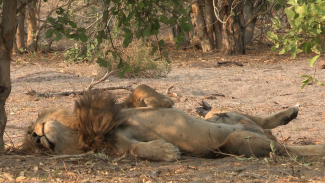 Wednesday night I was feeling horrible. My nose was stuffed up and kept running. Isn’t that a paradox? Anyway, it was difficult to get to sleep and even harder to stay sleeping. I woke up at 3AM and watched a couple of “Match Game” recordings on our DVR. Then I fell asleep. It felt like I was sleeping only a short time when I woke up again. The programmed coffee pot was grinding the beans. My alarm was beeping. It was morning.

It’s hard to explain. I felt quiet. That’s the only word that makes sense. Some background noise had stopped. It took me a few minutes to realize that the pain was gone.

Here I was, stuffed nose, coughing, but still feeling peace. I thought my shoulder pain has been gone most of the time and only flared at night or after physical therapy. I was wrong.

My shoulder has been hurting me for over a year. I learned to ignore most of it. Apparently, when I thought I was pain free, the pain was in the background. Yesterday, it was completely gone. And I felt something that felt totally new: no shoulder pain. I’m not saying that I don’t hurt all the time. My shoulder reminds me painfully when I move in a way that it doesn’t like. But then the pain stops. Stops.

Every morning since a year ago last month, my shoulder complained loudly when I woke up. Yesterday, it didn’t hurt at all.

I know I am nowhere near recovering. I have to painfully gain range of motion. I get physical therapy three agonizing days a week. But if I can feel like this even part of the time, I know the suffering is worthwhile.

What does this have to do with enforced chastity and FLR? Not a thing.

I still have a cold and my interest in sex still seems low. Who knows? Maybe no distraction from pain will help my libido. Maybe a spanking will hurt more than my shoulder. Well, I’m sure that will be true.

It’s the beginning of a new day for me. My head is stuffy. I’m coughing. I am light-headed. Who cares? I’m pain free!