Edging Has Physically Changed Me 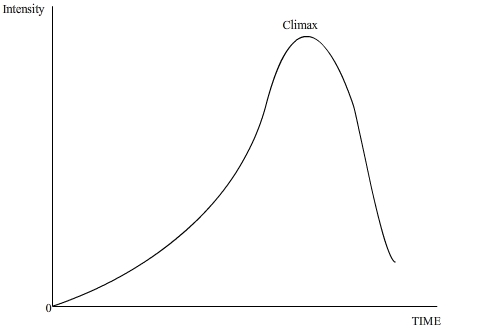 If you graph male arousal, orgasm, ejaculation and recovery, you will see an almost parabolic shape (image, right). I certainly follow this pattern. Arousal starts off in a similar way to a woman’s. My excitement slowly builds until I am feeling very much into the experience. Then arousal climbs very sharply. I am very close to orgasm within a minute or two.

The rest happens in a matter of seconds. I become consumed with excitement and then orgasm begins. Ejaculation starts two or three seconds after the beginning of my orgasm. I continue at this peak while most of my seminal fluid is ejaculated. Then, my arousal begins to die and within less than a minute, my erection is softening and my interest in sex has dropped sharply.

Since, for four years over 95% of my sexual arousal ends just before ejaculation begins, I believe my pattern has changed quite dramatically. The top of the curve has flattened a bit. There is a longer delay between the start of orgasm and ejaculation. My excitement builds a little more slowly. I think there is a few seconds delay between when I think I will be coming and when the orgasm actually starts.

I can’t explain why I think this has happened. It may be that some subconscious part of my brain has learned that stimulation will stop before I can actually ejaculate. It wants to please my partner. She is apparently pleased (since this happens almost all the time) if she has a chance to stop before I reach the point of no return.

This sensation is nearly painful if she waits until I am at the very brink of ejaculation. It is more pleasurable if she catches me when I am past the point of no return, but some distance from that point. When she does that, there is a delay of up to 15 seconds before the semen oozes out. My PC muscles contract and release and my erection bobs up and down.

But the sensation is more like being very aroused than crashing just before ejaculation. Mrs. Lion knows this of course and has perfected her technique. It’s been a while since she’s done this. I’m fine with that. My waits are longer and a ruined orgasm is the same as a full one in terms of my body’s reaction to it. I suppose it would be fair to give me a ruined orgasm instead of a full one at the end of my wait. I don’t think Mrs. Lion feels that is fair to me. While I don’t like it very much, I believe it is a fair way to end my wait.