I’m writing this on Monday. It’s punishment day. Every Monday and Thursdays are designated as punishment days;. I have to remind Mrs. Lion of that. Generally,she doesn’t wait for a punishment day to spank me for breaking a rule. Tonight I will be spanked for interrupting her on Saturday. Other activities interfered with punishing me sooner. That’s what punishment days are for. They assure punishments won’t be put off indefinitely.

It surprised me to learn how well I can be conditioned by negative reinforcement (spanking). As I’ve written before, the revelation came when I realized that I almost never spill food on my shirt or eat before Mrs. Lion. Failing to do either of those things gets me a spanking.

Once punishments rose to the level of being truly painful and hard to take, I found myself working hard to avoid earning them. In hindsight it seems obvious, but I didn’t realize that I had to seriously want to avoid being punished before I made any real changes. That was my first step. The next, and most surprising event is that I automatically avoid spilling or eating first. I don’t think about being punished. I’m conditioned.

Conditioning isn’t necessarily permanent. At some point I will probably get sloppy and spill or eat first. If I am severely spanked as a result, the conditioning clicks back into effect. When we went away over the July fourth holiday, I got salsa on my shirt. Mrs. Lion spanked me severely. There hasn’t been another spill since.

Each time I’m punished, it feels like Mrs. Lion is increasing the force and duration of the spanking. I expected that would happen. It isn’t easy to administer serious corporal punishment. It takes time, practice, and resolve. Mrs. Lion is demonstrating all three.

In an academic sense, I’m curious to see what happens when she begins punishing me for interrupting and being a know-it-all. The offenses and changes are mental. It isn’t as easy as checking to see if Mrs. Lion has started eating or dripping over the plate instead of my shirt. I have to change basic communication patterns. I think extinguishing both behaviors will be good for me. The actual change will be more complex for me to be conditioned to perform.

It’s probably good that Mrs. Lion has waited until now to begin this next phase. We jokingly call it Lioness 3.0. It’s characterized by Mrs. Lion feeling conscious awareness of any of my behaviors that break her flow of thought or conversation. I expect she will also become more consciously aware of things I do that annoy her.

She has the tools to punish me when she realizes I’ve annoyed her. Her go-to punishment right now is spanking. I imagine that won’t change. She’s threatened to also extend my wait for an orgasm as a penalty as well. I can see that or something else as add-ons to the spanking.

Obviously, anything she chooses to do as punishment can’t be something that I love to hate. It has to be something I truly want to avoid. For that reason, making me wait longer is too much fun to be an effective punishment. At least it’s a turn on if my wait  isn’t extended too much. A week or more without release from my cage would be no fun at all.

Of course, I like spanking, but her disciplinary spankings are no fun at all and I work hard to avoid them. There is no longer any overlap in my mind between play spanking and punishment. 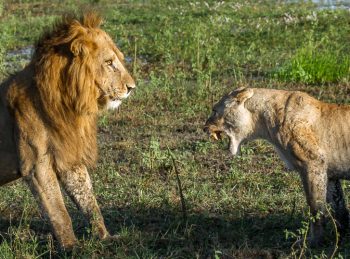 It started as a little joke. Mrs. Lion started referring to herself as Lioness 1.0. She wrote that she was working toward being 2.0. I would know when 2.0 arrived when she stopped worrying about whether she put clothespins on particularly painful areas of my balls. She wouldn’t worry about spanking me too hard. She would be consistent and punish me every time I broke a rule.

She said she was joking. She didn’t expect to get to that point.

Those clothespins are more often meaner plastic models. They go just where she knows I squirm and yelp. When I complain she just smiles and tugs on the most painful ones. Punishments are painful and merciless.

Recently, Mrs. Lion has made a few references to Lioness 3.0. She admits that she doesn’t know exactly how the next version will be different from the current one. It won’t be more intensity. 2.0  escalates routinely. The big change from 1.0 to 2.0 is her physical intensity as a top and disciplining wife. 3,0 can’t be more of the same.

I think I’ve gotten a peek at 3.0. The changes don’t relate to physical intensity at all. The next version is all about her and her feelings. Remember her post a few days ago? She said that giving me a play spanking made her feel closer to me, more intimate. That is a very profound statement.

Spanking me did something positive for her.

She discovered that topping me provides emotional satisfaction. 3.0 actively enjoys topping me. She does it because she likes how it makes her feel. No, we aren’t there yet, but it’s clear to me that is the next step.

3.0 will punish me for things that are meaningful to her. For example, my newest rule is that I am not to act like I have the only right answer to things. It’s a bad habit. She will tell me about a plan for, let’s say, buying an ink jet printer. I will pronounce that the only kind she should get is a laser. She hates that. I’ve been put on notice that she will punish me each time I do that.

She has a rule on the books the forbids interrupting her. This rule has only been enforced a few times in the more-than two years it has been in force. The same way that 2.0 religiously punishes me for eating first, 3.0 will do the same for interrupting or acting like a know-it-all. She will broaden the list to anything I do that annoys her. Punishments will be for meaningful offenses. She won’t stop strict enforcement of the other rules as well.

3.0 is motivated by a sincere desire to make me change.

We’ve both learned that a disciplinary marriage can effect real change. The evidence is unmistakable. It’s much harder to move from spilled food to interrupting. Spilling is external and doesn’t hurt if I offend. Interrupting hurts Mrs. Lion and requires her to be self aware and willing to demand respect with at least the same force she gives ketchup on my t-shirt.

It will be easy to see when 3.0 moves in. She’s visiting now and then, but it won’t be long before there will be a new lioness in town.