By:
In: CBT, Mrs Lion Comments 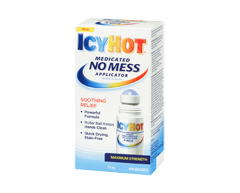 If Lion noticed he made no mention of the fact that I moved the Icy Hot so I would remember to use it. I told him I was going to put it on the bed but I worried the dog would chew it and get a mouthful of yuck so I left it front and center near my sink in the bathroom. He didn’t question it. He may not have been paying attention. Or he may have been ignoring it altogether. Sometimes it’s best not to think about burning things on your balls.

He was kidding. I knew he was. But today he told me he was very comfortable in his cage. It usually pinches while he drives or when he’s sitting at work. Today it’s smooth sailing. OK then. That must mean my weenie is very comfortable and doesn’t need to be unlocked. Maybe, despite Lion ignoring the Icy Hot, my weenie knows it’s waiting for his friends, the balls, and he’s being quiet and unassuming. “Shhh. Don’t make a sound and she’ll forget we’re here.” Not likely.

I will unlock weenie and the boys tonight. I’m 99% sure I’ll use the Icy Hot.