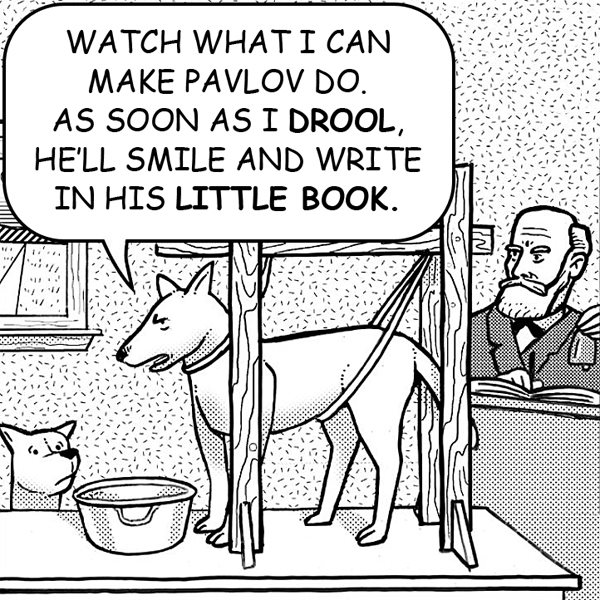 Time is a drug. It’s an anesthetic. As it passes, painful memories dull into a sort of memory film. It hurts when we watch it. But the pain is less sever. It almost feels like it is happening to someone else. The pain becomes dull, almost comforting like a familiar companion.

Time also acts as a kind of sculptor. Repeated, or continuous experiences are etched deeply in our psyches. They become important components of our very being. This happens on a level far below consciousness. We don’t know anything’s changed until the experience ceases. Behavioral psychologists call this conditioning. Virtually all animals display it. In a way, it’s learned instinct.

We all experience it on different levels. Conditioned reflexes are important to survival. These learned patterns allow us to drive a car, catch a ball, and survive in a complex society. Conditioning can be unlearned as well. Remove the stimulus long enough and the pattern in our brain dims, and finally extinguishes.

What happens if you lock a chastity device on a man’s penis and keep it there nearly 24/7 for years? Is he going to be conditioned to having the device around his genitals? If so, how would you know? After all, he can’t remove it voluntarily. The only way to find out is to remove it and see what happens.

That’s what happened to me. I wore a chastity device full time for over three years. It only came off for brief periods during that time. Then it was removed. It had to be because of my shoulder surgery and recovery. It was off for over eight months. Mrs. Lion appeared not to care. She’s made it clear that she is as happy with me wild as she is with me locked up.

At least that’s what she said when we discussed it. More recently, she admitted that she thought when I’m she feels happier it worked for us, despite it isn’t strictly necessary, it adds something to our relationship. She says she’s happier when I’m locked up.

I missed wearing the Jail Bird. I couldn’t explain why. It made absolutely no sense. I didn’t feel the same, kinky arousal wanting to be caged stimulated before we began enforced male chastity. I didn’t feel even slightly aroused thinking about returning to the device. But yet, I wanted it to be on. I asked Mrs. Lion to lock me up again.

I also let her know that it was important to me that she lock me because she wanted to, not because I asked. I don’t understand why that was so important, but it was. So, Mrs. Lion decided to wait until she was sure I would understand that I was being locked up because it was her will. I got impatient. Every so often I checked in to be sure she hadn’t forgotten.

She hadn’t. Because I asked, she delayed further. Finally, she decided that she would just put the cage back on me. She expected me to grumble about it for the first week or two. I didn’t. I feel a sense of comfort that I am locked up again. It isn’t the feel of the device. I’m usually unaware that it’s there. But on a deeper level, I know it’s there. I’m comforted by it.

I’m not sure if my request to remain locked when traveling is part of this as well. I survive if the cage comes off. I don’t have symptoms of depression or anxiety. I’m just more comfortable in a way I can’t describe when it is in place. I don’t play with myself when wild and away from home. Wearing a cage has no behavior-correcting value. It’s just right when it’s locked in place.

Is it a negative thing that I am conditioned to be locked in a chastity device? Do I need to be deprogrammed? That thought has occurred to me. I have a psychological dependence on Mrs. Lion keeping me locked up. True, it’s not debilitating when I am wild. I’m just happier when I’m caged.

Our dog has the same sort of conditioning. She has worn a collar since she was a little puppy. She’s five now. She makes it clear that she doesn’t like her collar removed, even for a short time. If we take it off to change her rabies tag or for a bath, she displays clear signs of anxiety. Her collar brings her comfort. She associates wearing her collar to the security of her home with us. Obviously, she can survive, even have fun without her collar. But she is happier and more settled when she wears it.

I’m not that different. I don’t feel anxiety and fear when my cage is off. But I do feel more comfortable when it is on. I had no idea that this would happen to me. But it has.