Getting Started With Male Chastity

Now that we’ve been practicing male chastity for six years, I think I have a pretty good handle on what it is, and more importantly, what it isn’t. In the beginning I was very turned on by the idea of wearing a male chastity device. I love bondage and the chastity device is certainly a very intimate form of bondage. I think this is true of most guys. In the beginning we get obsessed with getting the right chastity device. We read everything we can find about the hardware. We may even buy a device or two from Amazon or dhgate.com. We want something cool to lock around our cocks.

Mrs. Lion was sure that by six months I would want this over and done with. Within a few weeks of starting, we both surprised ourselves by realizing that we liked this arrangement. I was getting regular sexual stimulation and Mrs. Lion enjoyed having control of my sexual pleasure as well as deciding when I would get to ejaculate. It turned out that we both really enjoyed this power exchange. 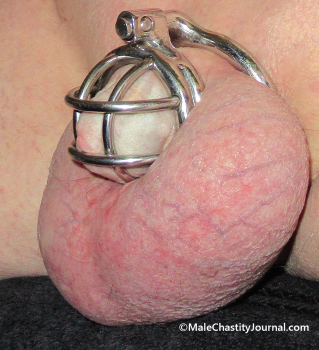 We are still doing it. It’s changed very little. The only noticeable difference is that I’m not always locked in a chastity device. Mrs. Lion is indifferent right now as to whether or not I wear one. It doesn’t matter in terms of our male chastity power exchange. With or without a device locked on my penis, I never masturbate. It’s almost as if I’ve forgotten how. The only sex I receive comes from Mrs. Lion. She allows me to get hard if I want and I can use my hand to do it. But I’m not allowed to get close to the edge of orgasm. I never have. Male chastity for us is a way of life.

It doesn’t feel odd that I have lost control of my sexual pleasure. It feels natural and comfortable. I haven’t masturbated in six years. Unlike some guys, Mrs. Lion does not allow me to do it myself even under her supervision. She wisely believes that if she allows me to do it any time, I will be likely to try it on my own. So my paws remain away from “her weenie”.

If you are new to this, or your man has asked you to lock him in a chastity device, there are a couple of important points that our experience might illustrate. The first is that the only thing that male chastity is about is controlling the male’s sexual pleasure. That’s it. A chastity device is a very good idea in the beginning; by that I mean at least a year or two. It takes that long to get fully conditioned. I’m completely trained in terms of the sexual use of my penis. It belongs 100% to my lioness. Three years of continuously wearing a chastity device trained me very well. I know that if I’m even tempted to get myself off, Mrs. Lion will lock me back up immediately. Being wild, as we call it, is a privilege.

I think that writing an informal contract is an important beginning step with male chastity. Its value isn’t so much that it “legally” binds you as much as it defines the boundaries of this new, hot activity. Even if you plan to do it just for a weekend or a week, the contract adds a lot of heat to an already hot idea.

A chastity contract isn’t a good document that requires a form or some other complex set of instructions. It only has to cover a few important points:

1. How long the agreement is in force.

2. How often the device come off for cleaning and teasing.

3. How long (this is optional but important for some people in the beginning) is the maximum amount of time he has to wait between ejaculations. Another way to look at this is what is the minimum amount of time he has to wait. For example, it could say that he will not even have a chance at ejaculation until at least seven days has passed. This is useful and very exciting.

That’s it. I don’t suggest any other complications are required. Male chastity is a very simple game. A lot of guys try to complicate it with all sorts of rules and penalties. You may want to add stuff later, but in the beginning this is really as far as you should go.

I don’t often say “should”. I really hate when bloggers make pronouncements about what you should or should not do. The only reason I’m saying that now is that the very simple act of locking up a man’s penis and then controlling his sexual pleasure is very powerful. A lot of guys don’t realize just how difficult this can be. Also, perhaps more importantly, most women start out with absolutely no idea what this is about or why their man wants them to do it. It will take time for both partners to develop patterns that support male chastity. It’s taken Mrs. Lion and I years to fully integrate this into our marriage.

Now it is so deeply embedded in our relationship that I don’t think either of us would have any real idea how to stop. I can’t imagine having any kind of sex without Mrs. Lion’s explicit permission. In fact, I can’t imagine having any sort of sex without Mrs. Lion producing my pleasure. She has become my sole source of sexual gratification. I can’t do it myself anymore. She and she alone provides me with orgasms. That’s powerful stuff. It doesn’t seem that way when you start because it’s also very hot. Trust me, at some point the idea that sex is now no longer in your own hands sinks in. When it does, you may want to get out.

Obviously, when I realized it, I was happy. I’m still happy. I have never regretted giving Mrs. Lion power. She wields it with love and not a little mischievousness. She has fun with it and so do I. I hope you do too.