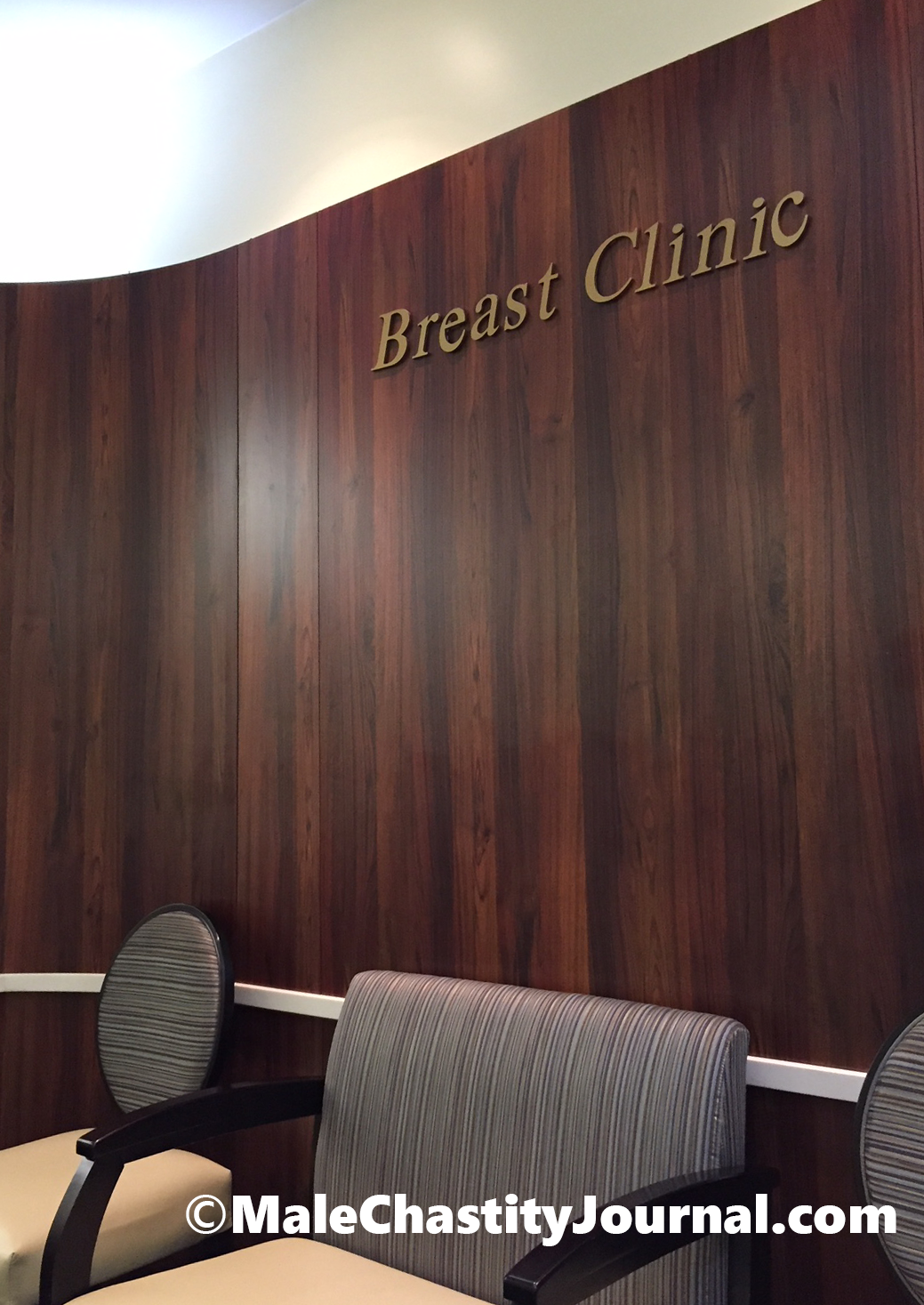 Late last week I discovered a “bump” above my right nipple. It was a little sore. Naturally, I was concerned. I made an appointment with my doctor. He felt the swollen area and told me I should get a mammogram. A what?

“A mammogram,” he repeated.

I sighed audibly. He told me not to worry. In thirty-five years of practice he’s sent lots of men and none had cancer. I made an appointment for this past Thursday.

I went to the hospital and checked into the breast clinic. The what? I sent Mrs. Lion a picture of the waiting room. It’s the same one above.

I was not a happy camper. Before long, I was escorted into the mammogram room. The technician told me she would squeeze my breast between two pieces of lucite. I reminded her that I am male and don’t have breasts. “Yes you do,” she said. I rolled my eyes.

Sorry ladies, the procedure was painless for me. I can now say that whining about a mammogram is just whining. I can’t get the, “You never had one. You have no idea how horrible it feels.” Yes I do! It was quick and painless. Of course I did worry I have cancer. The mammogram was followed by a sonogram of the bump and the area around it. A couple of minutes after the sonogram, the radiologist came into the room and told me that the bump wasn’t cancer and my breasts are clear.

There’s that word again. I know that males and females have breast tissue. Mine isn’t visible from the outside and the mammogram was a tiny profile. I’ve seen endless jokes by women that if we had our balls squished like their breasts (a manogram), we’d know. Well my breasts were squished just like theirs. NBFD (No Big Fucking Deal). The myth is busted!

I also visited a dermatologist about my itching. He prescribed a topical cream as well as a pill that is used off label for eczema (my insurance won’t pay for it for this diagnosis). The drug is used as an anti-rejection pill for kidney transplants. The dermatologist insists that it will suppress my immune system just enough to stop the allergic itching.

I’ll give it a try. The list of possible side effects is a little scary and I will have to get blood tests every two weeks until I reach the full dose. I’m starting with a low dose to help my body get used to the drug.

Maybe all this medical stuff has contributed to my lack of interest in sex. I’m concerned there is a more basic issue: My brain knows I won’t get sex most of the time and has simply turned off the interest until an orgasm is likely. This is my current theory. It’s probably wrong, but it’s been kicking around in my head for a while now.

Is this just another myth I’ve created to explain a more organic loss of libido? Sex has moved into the background lately. Maybe I’m just trying to rationalize this change. This could be a self-fulfilling prophecy and will result in further loss of sexual interest. I hope Mrs. Lion can prove me wrong.