By:
In: Lion's Journal, Living with chastity
With: 1 Comment 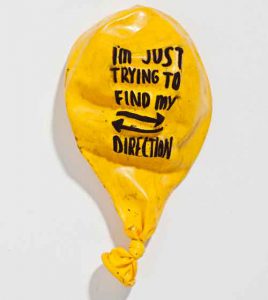 The energy in an enforced chastity relationship can leak out like air from a balloon. What’s left in the end is a sad, wrinkled, little rubber sack. The bright, party color is still vibrant, but the energy is gone. Nothing looks sadder than a deflated balloon on the littered floor of last night’s party. So much promise, so much past joy. The empty chastity device now relegated to the sock drawer is another sad symbol of unrealized promise. It’s there because someone forgot that enforced chastity is not only about sex.

Like any relationship, enforced chastity has a “honeymoon” phase. Most chastity blogs document this phase very well; so many new things to try. Sooner or later, the honeymoon is over. There aren’t many new things to try. The power exchange, while established, needs a lot of energy to keep alive. Both partners have to remain committed to their agreement. Enforced chastity and FLR is an intricate dance.

Realistically, it is unlikely that both partners will remain fully motivated all the time. Too many other things in life can intrude. If the keyholder loses interest, the presence of the chastity device on her partner is a powerful reminder that she agreed to take charge. Often that is enough to keep things going. But what happens if he loses interest? It’s true that he may be locked up. But if he is unhappy and asks to be unlocked, a new keyholder is quite likely to agree. In the beginning (which can be a year or more), she has assumed her role because she loves her partner and wants to do what makes him happy. If he appears genuinely unhappy with the new arrangement, she has no reason to continue.

It’s very true that in most power exchanges, the dominant partner “makes” the submissive partner do what he wants done to him. The power exchange is a form of sexual play, not a real power exchange. A guy asking for enforced male chastity wants to be prevented from having sex; at least for a while. He may grow bored with that. In many cases, the couple drops it and finds other things to do. We added a female led relationship and domestic discipline to our mix. These can get old too.

Many women don’t want to continue something that isn’t working for there partners. More significantly, exercising authority over activities they don’t really care about is work that they aren’t very committed to continuing. It comes down to WIIFM (What’s In It For Me). Both partners need to perceive a benefit if the power exchange is to survive. The power exchange has a life of its own. It has to provide each partner with real benefits they couldn’t get any other way.

In most cases, one partner will get more benefit than the other. In the beginning, the male generally is the primary beneficiary. His fantasies are coming to life. During this honeymoon, the keyholder has a chance to discover her benefits. Our blog gets visited by keyholders searching for meaning in their new roles. What most guys don’t realize is that people, male and female alike, don’t really want direct control over another person. Too many caged males think that the power they surrender is benefit enough for their keyholders. In some cases that’s true. In most it isn’t nearly enough.

Let’s assume that the authority along with other less tangible benefits make FLR and enforced chastity attractive to a keyholder. As she gets more independent and into her role, her partner starts feeling buyer’s remorse. Maybe he made a mistake. He can feel resistance growing. She is really calling the shots. He isn’t being consulted. He starts expressing his unhappiness. She, because she loves him, feels guilty that she is making him unhappy. You can guess what happens next.

There is no one to remind her that he asked for it. He agreed to continue without a chance to quit. That doesn’t matter. His partner and keyholder is prepared to accept his veto. This may seem surprising. She’s been perfectly happy punishing him for breaking her rules. Why? Because he asked for that. Now he is losing interest. This is the crucial crossroad that determines if the power exchange is durable or temporary.

If he is unhappy, but his keyholder intends to keep the power exchange alive, she has to take action. The fantasies say she should punish him for wanting to quit. This is very unlikely to do much good. It’s time for the talk. The keyholder, in this case, is a parent. She has to lovingly let her man know that she understands things don’t look very good to him right now. However, there is an agreement in place that she expects him to honor. A good way to help get things back on track is to give him a clear challenge with a reward for success. Perhaps tell him that he will be locked up (if he isn’t at the moment) in his chastity device and if he is obedient and cheerful for a week, she will unlock him and give him the orgasm of his choice. If not, he will be punished and his wait will be a week longer for each offense.

The key is to refuse to end the power exchange and to refocus him by giving him a very specific assignment with a desirable reward for success. It is very likely his loss of interest is due to his need for more focus. He wants to know that you are in firm control. He needs something specific to bring his surrender into sharp focus. He has to learn he is loved but that he has forever lost the control he surrendered. He will learn to love his role. Even if he doesn’t, he will learn to live with it. He made his bed. He will continue to sleep in it.

What do you think? Cancel reply

Our posts are also available as podcasts from Apple Podcasts! (Click to visit)
Alexa can play our posts too. Try: Alexa, play the latest Male Chastity Journal podcast from apple podcasts.