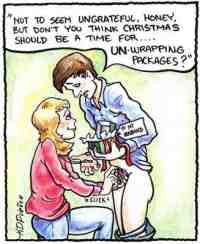 A large part of the problems guys have when trying to get a keyholder so they can begin enforced male chastity is communicating exactly what they want. I’ve been thinking about this problem. It seems to me that like many things, “male chastity” is a misnomer. Let me explain:

back in the early days of computer communication, there were places people could post comments, questions, and answers. Some were organized into “newsgroups”. I believe they started in universities as a way to let people easily find subjects of interest. It was a naming system similar to the way files are named. A couple of groups in the alt (alternative).sex group, were alt.sex.spanking and just plain alt.sex. A lot of the conversations focused on nomenclature. Right from the start, Internet people obsessed on terminology. A debate raged on several groups about what the feminine form of “dominant” would be. A lot of people disliked what they considered the diminutive “dominatrix” name. After way more conversation than is needed, people settled on “domme”. I, for one, refuse to use this silly Internet-created word.

Anyway, almost everything pertaining to sexual practices went through similar discussions. I guess it’s easier to talk about what to call things than it is to actually do them. There were thousands of these discussion groups outside of the University nomenclature. This is important because the ability to attract and gather people around obscure interests created communities centered on those things. All you had to do was find a server, load discussion software, publicize your group on established newsgroups, and off you went.

As it turned out, a little group formed around penis bondage. This group is still in existence: altairboy.com. It featured conversations about what we now call male chastity devices. I don’t recall the exact debate, but there was conversation about what to call the practice of building, wearing, and escaping from penis bondage. At some point, the term “male chastity” was accepted. It made sense because the idea of women wearing chastity devices, which allegedly prevented them from having sex and getting pregnant from unauthorized males, was very close to the male version. The male version as we know, prevents a male from getting sexual release.

The original practice was all about “security”. Practitioners would make or obtain a device, lock it on, and leave it in place until they could escape without using a key. Every day that went by without escape created more frustration and horniness. This practice had the built-in incentive of urgently needing sexual release. Back in those days I reviewed quite a few of these devices.

The idea was all about the hardware and escaping from it. That was male chastity. Later on, some guys would find people who would hold their keys. In the escape context, that meant they remove the only non-escape ability to free their penises. It didn’t take long for some to realize that if they didn’t try to escape, surrendering their keys gave the keyholder a power advantage.

This is where things began to go off the rails. Device wearing became a way to prevent the guy from cheating. Presumably, the keyholder could rest assured that the poor locked male, no matter how frustrated he got, would be physically unable to get himself off. In this context, trying to escape would be extremely bad form. The real game moved away from the hardware and focused on orgasm denial and control.

Now, male chastity referred to two distinct practices that could work together: physical penis restraint and orgasm control. These two practices definitely pair very well. One facilitates the other. To this day, most of us think of male chastity in terms of a device restraining penis and a keyholder cruelly withholding blessed ejaculation. Actually, this isn’t a good thing. If you go by the current resources on male chastity, in order to join the club, you need to want to wear penis bondage equipment, and turn over ejaculation control to another person.

The big challenge comes when you try to find a keyholder who likes the idea of your penis in a cage and also enjoys watching you get frustrated because she won’t unlock you and allow you to get off. Even if you really want to wear a chastity device and have your partner completely control your ability to ejaculate, you still need to consider how limiting it is if you ask for both at once.

If you are like me and get excited surrendering sexual control and find being physically restrained even hotter, you want both right from the start. I was lucky. Mrs. Lion was willing to lock me up and take control of my ejaculations. In the beginning it didn’t work out the way I thought it would. She decided that if she had control she would get me off every day. We had a talk about that. Her reasoning was perfect. She had control, therefore, if she wanted to see me ejaculate every day, then she would. If it weren’t for the fact that I was physically having a hard time doing this, it might still be going on today. In this case, the device is really not needed. Well maybe it was. I could hold onto the keys and stop her from wearing me out.

Some guys also wanted to be able to try to escape the device. Now they were asking their keyholders to indulge them in their escape artist fantasy as well. I think that most of the people who practice this simply try to escape. If they do succeed, they don’t get themselves off. They just tell her keyholder that they’re going to buy a new device that’s more secure.

I’m hoping that if you’re new to this very hot practice: enforced male chastity, that you can see your best chances of convincing a partner to be your keyholder is to limit your request to the most important single practice you would like to begin. If your partner enjoys bondage and would find it fun to lock your penis and keep the key, then by all means ask her to lock you up. My suggestion is not to ask her for anything else. It won’t take her long to realize that she can tease you by refusing any request you make to get out until she wants you to ejaculate.

Chances are very good if you start off asking for penis bondage, she will ask you why you want it. At that point you can tell her that it turns you on to lose your ability to play with yourself and you like bondage. She might then ask you what would be her role? You can then gently discuss keeping you frustrated. In this context, you are asking for penis bondage. She is considering how she might make use of it. The less you tell her about possible applications, the better off you will be. Let her discover for herself how she can use the power of holding your key. It takes patience and self-control for you to do this.

On the flip side, you might tell her about your sexual fantasies where she controls if and when you get to ejaculate. You can couch this conversation in terms of the practice of delaying your orgasm as a form of very exciting male foreplay. Don’t mention any hardware. Also, resist the temptation to explain in too much detail how you see this playing out. You might suggest that she tease you with normal foreplay and then have you focus on her sexual pleasure. You can suggest that you need not ejaculate each time the two of you have sex. I would strongly urge you to stop there. Let her figure out the rest. Again, I’m very sure she will discover ways to turn this into fun for her and you.

If you also want to wear chastity hardware, once the two of you have established a pattern of refusing you ejaculation at many sessions, you can talk to her about the idea of helping her maintain your abstinence by having you wear a chastity device. At that point you can tell her the idea turns you on.

In practice, if I am not in a cage, I can make myself hard. I can’t make myself ejaculate. Mrs. Lion is willing to let me occasionally get myself hard. If she thinks I’m doing it too often, I’m back in a cage. I think she considers that if I give myself erections once in a while, I’m simply helping to frustrate myself even more. She’s right. When I do that, the net effect is that I’m hornier. I’m truly not in any danger of getting myself off. If I let her know that I’m missing my chastity device, she will usually indulge me and lock me up again. Once I’m locked up, I have no input on if or when I might be allowed to run wild.

Wearing a male chastity device and experiencing orgasm denial and control fit very well together. There’s no way to deny that. However, you can practice enforced male chastity without a chastity device. You can wear a chastity device without practicing orgasm denial and control. If you’re lucky, like me, your partner will be willing to initiate both if you ask. My suggestion is that you decide which of the two practices she might like better, and present that one all by itself while resisting the strong urge to tell her exactly how she should make use of the practice.

Too many of us, definitely me included, would like to write the script on how we want our partners to practice enforced male chastity. If you think about it you’ll quickly realize that doing this is going to be self-defeating. Give her the tools. Let her work out how she wants to use them.