Back In The Cage

By: Caged Lion
In: Lion's Journal, Living with chastity 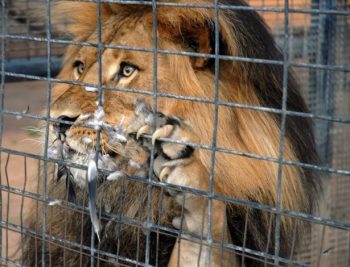 For the record, I haven’t complained once about being locked up again. Other than some time spent adjusting before peeing, the plastic cage is proving very comfortable. It’s so light, I forget I’m wearing it.

Since being locked up, I’m not particularly horny. I don’t know if this is related to being back in a chastity device. It probably isn’t. I tripped over a dog toy in the middle of Saturday night on my way to the bathroom. I managed to get a deep bruise right where I sit. The bruise doesn’t show on my skin. But it hurts! Maybe that is affecting my libido. This is the first pain in my ass that wasn’t delivered by Mrs. Lion in a very long time. She still owes me a play spanking, but she won’t give it to me until I heal. If I require punishment, I guess that means she will have to use a method other than spanking.

I thought I would have more trouble adapting to wearing a chastity device again. Mrs. Lion unlocked me on Sunday night for some teasing. I guess that means she is also comfortable keeping me locked. She did say that she wanted me wild during our vacation trip at the end of August. I didn’t argue with that. The reason she brought that up is because over the years I’ve talked about being locked without a break except for teasing and cleaning (the cage, not me). To me, at least, that’s the “romance” of male chastity; the idea that the chastity device remains in place unless my penis is needed for something. Unlocking during business trips and vacations goes against that concept.

The fact is that it’s silly to fixate on the times I’m allowed to be wild. There is always a reason and caged or not, I’m not going to get into any trouble. The idea of no release except for those brief breaks is hot. The reality is that it doesn’t matter if I’m allowed to be wild. The idea that I’m under the sexual control of my lioness, regardless of penis bondage, is the hot concept for me, not the hardware.

In the same vein, how often I get to ejaculate is beside the point as well. The point is that Mrs. Lion alone decides if and when I get to come. In theory, at least, I don’t even have to be in the mood. The Magic Wand is a reliable way to arouse me and make me orgasm. I will enjoy that experience even if I had no interest in sex when she started. It’s all about the control. How often is not a measure of enforced male chastity. The true measure is the fact that I have no control over anything sexual. Period.