Anything Can Be a Toy

Lion can’t seem to catch a break. I allowed him to pick from the Box O’Fun last night and he wound up with clothes pins. I swear there are other things in there. Honest!

This time they were only regular clothes pins so it wasn’t so bad. I didn’t count how many I got on him but he was sufficiently covered. Clothes pins stuck out from his balls like pins in a pin cushion. Some of them were attached to more sensitive areas than others. I suspect individual clothes pins hurt more than others anyway. I doubt there’s much quality control in the clothes pin business. They only have to hold clothes on a clothes line, after all. As long as the wood isn’t split and there’s a spring in there, we’re good to go. 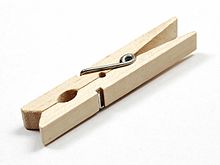 Of course, if you look at things through Lion’s eyes, almost anything can be used as a toy. The most innocent looking thing has probably been used to torture someone along the way. I wonder how shocking it is to an inventor when they realize their product has been bastardized by kinky people around the world. I would assume after the initial shock wears off they’re happy with more sales. Perhaps they’re even the one who realizes can have ulterior uses.

Maybe the Velcro guy discovered those little teeth hurt like hell when they scratch the skin. Then he may have had a eureka moment and brought some to his monthly meeting of the kinky club. Trust me. Stranger things have happened. And Lion has usually had it happen to him.

I’m thinking of taking tonight off. Lion had an orgasm last night. It’s not a Box O’Fun night. We can just relax, snuggle and watch TV. Sounds like a good night to me.