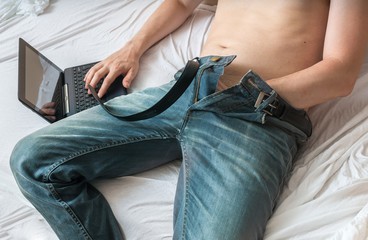 On the other hand, I genuinely enjoy hand jobs. Mrs. Lion is an expert at delivering them. We both agree she doesn’t need lube. I never used any when I did it myself. Sometimes Mrs. Lion does use lube. It’s nice as a change, but dry rubs usually feel best.

That brings me to a point I only considered for the first time today: Would I be as humiliated if I were masturbated in front of others as I would if I did it myself? If Mrs. Lion brought a friend home, had me strip, and then gave me a hand job in front of her friend, I think I would be more humiliated than if I did it with my own hand.

There’s the aspect of being naked and aroused in front of fully dressed women. That would be the same in both cases. If I had to jerk off, I could drift away into my own world. I would be embarrassed. However, if Mrs. Lion jerked me off and carried on a conversation while doing it, there would be a heightened sense of humiliation because making me come would just be part of a demonstration of how I am sexually treated.

I would feel more like an animal giving a “donation” by being dispassionately milked. Since this has never happened and is unlikely to be something that Mrs. Lion would do, I’ll never find out what it’s like. I can imagine that I would have a hard time getting off if treated this way. I’m sure that eventually I would. What do you think about this sort of treatment?