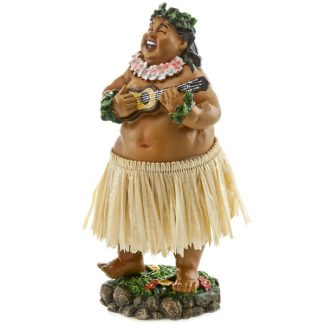 I always tease Lion about getting him one of those hula girl statues for his car. He grumbles every time. The other day we had our company Christmas lunch. We exchanged white elephant gifts and I wound up with a hula girl. Except it wasn’t a hula girl. It was a hula guy. I teased Lion about putting him in Lion’s car instead of a hula girl. He grumbled that he didn’t want it in his car. He suggested I put it in my truck.

I wasn’t really going to put him in Lion’s car but what if I did? Would it embarrass Lion to have a hula girl in his car? Yes. Would it be worse if the hula girl was a hula guy? Oh yes! The bigger question is that if I told Lion to put Braddah Ed (as the package calls him) on his dashboard, should he have to do it? I say yes. My power in this relationship is not relegated to the bedroom. Lion wears panties to work. He has two punishment shirts to wear in public. If he spills food on his shirt in a restaurant he still gets punished. My weenie is locked away no matter where he goes. If I want the hula man to dance on his dashboard the hula man should dance on his dashboard.

A few weeks ago my windshield got cracked when a rock bounced out of a truck on the highway. Many cars in Washington have cracked windshields. The cops don’t pay much attention. In New York they’d pull you over just for that. I don’t think Washington cops even bother mentioning it if they’ve pulled you over for something else. It’s just a fact of life here. The last time it happened Lion insisted I get it fixed right away. It wasn’t big and I figured I’d get creamed right away anyway but Lion was insistent. This time I wanted to wait a bit. The crack is growing and now Lion was getting worried. He made an appointment for the new windshield. He’s working from home this week so I stole his car to get to work. I told him yesterday that I’d install hula man on his dashboard while I had his car.

Unfortunately, hula man is a big boy. He doesn’t fit on Lion’s dash. I tried. Damn it! I wasn’t really going to leave him there. I just wanted to take a picture of the Buddha-bodied, grass-skirted sex symbol to make Lion nervous. He does, however, look right at home in the cup holder. He’d still be a reminder of exactly who’s in charge when he happened to catch Lion’s eye.