The Last Jerk Off Picture Show

By:
In: Lion's Journal, Starting enforced chastity
With: 0 Comments 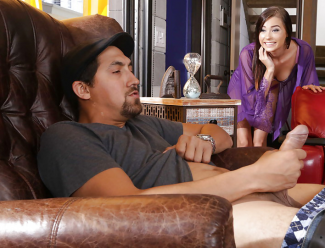 Worse yet, the guys who read these books, believe every word and are invariably disappointed when they try to duplicate the “adventures.”

Let’s face it, most of us guys imagine ourselves to be sexual experts. We tend to take our fantasies at face value. I can imagine myself locked in a chastity device, I even own one, so I must understand how to teach my partner to sexually dominate me.

Mrs. Lion has been dominating me for over four years. Getting where we are now took every day of that time. What’s more, we still have a lot to learn. It’s a good thing that this education is working well for us. Let me start at a new point: The real beginning.

All power exchanges are consensual agreements. Both people need a clear understanding of exactly what is going to happen. When I asked Mrs. Lion to sexually dominate me and lock me into a chastity device. I asked her if she would do it. She agreed but wanted a lot more information. I told her how I thought the arrangement would work. I explained that I wold be locked into the device except when under her supervision. I said that she would provide any orgasms I would get while under this agreement.

She was puzzled. “What other orgasms were I getting?” she asked. I told her that I masturbated a couple of times a week. She was genuinely surprised. She didn’t realize I did that. “That will have to stop,” she said. I agreed. I had no idea she imagined that the only sex I had were the bimonthly hand jobs I had been getting from her.

She reviewed what I was asking of her to be sure she understood. Then she asked me to jerk off while she watched. I was surprised, but agreed. When I finished, she locked me into the device. I had to know why she wanted me to do a little show.

I asked her and she said, “I wanted to see how you do it. It will help me learn what you like.” I told her that I thought it might have been giving me one last chance. She assured me it wasn’t that poetic, but she liked my take as well. I think the real answer was too subtle for us to contemplate st the time. I was physically transferring control of my penis to Mrs. Lion. Meekly undressing and wanking off for her, is the most submissive sexual act she would demand. I blushed a bit, but immediately obeyed. When I finished, she used her fingers to remove the product i mad for her. I blushed but remained silent. Her control began without any fuss or bother.

Now, we are wll into our fifth year, that was the last time I got myself off. She likes the idea that only she can make me ejaculate. I don’t even think of getting myself off; cage or no cage.

My point is that we started with a simple, easy-to-understand agreement. I gave up the right to get myself off and Mrs. Lion agreed to teasing me three times a week. As we gained experience and through my fantasy-driven ideas, our power exchange has grown into a full-blown FLRD in a few years. Not bad.

Mrs. Lion’s positive-but-purposeful agreement to my wishes, has helped us develop a lasting, satisfying lifestyle. We’ve made plenty of mistakes. Even our course corrections enhance our roles and lifestyle.

To further underline the importance of this message is to bear in mind that a thousand-mile journey begins with a single step. The first step for me wasn’t that I asked Mrs. Lion to fulfill my submissive fantasies. It was to propose a simple set of activities. Mrs. Lion would keep me locked up and would tease me every couple of days. I agreed to continue for a negotiated length of time. In our case, six months. By the way, we’re well past that point.

If you want the entire story, read the blog forward from its start. We began writing it almost as soon as we started.