By:
In: Lion's Journal, Punishment
With: 2 Comments 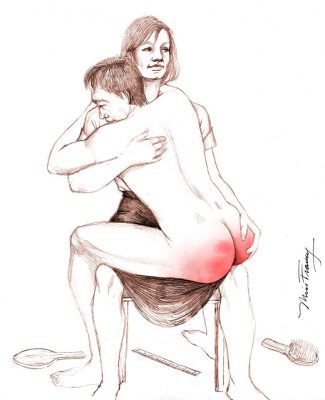 Last night Mrs. Lion had enough. We had a mild argument about who should cook dinner. It wasn’t really about who should cook. It was about my reaction to her question about who was going to make pancakes. I interpreted her question as her wanting me to cook. This is what triggered the upset. She said that she was willing to cook. I went to the kitchen and began making pancakes. She got the griddle and the pancake mix, so we both did part of the cooking.

After dinner, Mrs. Lion took her shower. She emerged clean and clearly upset. She got a paddle from her collection. She asked me if I had reminded her it was punishment day. I’m supposed to do that every Monday and Thursday. I hadn’t. She then went on to tell me that she was tired of me being upset with her. She said that earlier in the week I complained about her constant iPad game playing. Now, I grumbled about cooking dinner. I needed a spanking.

She proceeded to spank me. I still have a little sore spot. When she was done, she asked me if this was a”moderate” spanking. I had commented in an earlier post that her spankings tended to be moderate.  My mom didn’t raise any stupid cubs. I said, “Oh no. That was much more than moderate.”

Over the course of the evening she repeated the question. In fairness, this spanking was more severe than usual. It lasted longer and really made me yelp.

I was very unhappy when she brought out the paddle. The last thing I wanted at that moment was to be punished. Of course, 2.0 paid no attention to my lack of interest. Fair enough. She was less grumpy after punishing me. I wasn’t particularly cheerful. As the evening wore on, the bad feelings wore off and we held hands and chatted amicably,

We have very few occasions like this. I can’t remember when or if Mrs. Lion ever spanked me because I pissed her off. In a very real way, this was a landmark. It also proved a point about disciplinary spanking. Mrs. Lion spanked me because she felt angry at the way I was behaving. It wasn’t really because I forgot to tell her it was punishment day. It was because I upset her. That’s absolutely valid.

After the spanking, the storm clouds blew away. My punishment sent both of us a message that the beating resolved the bad feelings we both had. I’m surprised that worked. I’ve heard that punishment can resolve upsets and wipe the slate clean. I don’t remember ever experiencing it for myself.

There was nothing staged or scene-like last night. It was textbook spousal discipline. It worked.