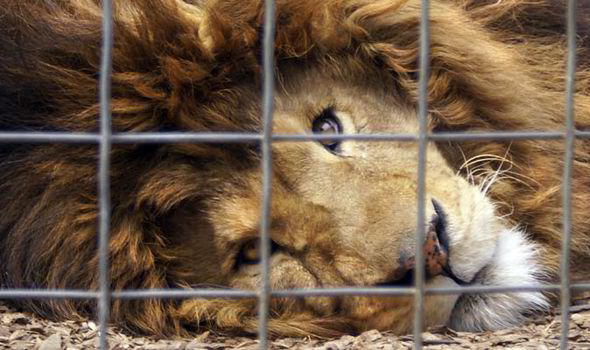 Mrs. Lion said I would be locked in my chastity device when we return from our trip. That gives me a little more than a week to remain wild. I have very mixed feelings about being returned to captivity. It’s difficult for me to explain exactly how I feel about this.

It’s true that before my shoulder surgery at the end of April, I was almost always caged with short breaks for teasing or orgasm as well as when we were camping. I wore the device well over 95% of the time. Lately, I’ve gotten used to the convenience of being able to stand to pee and not dealing with the adjustments when pinched.

What’s the point of going back into captivity? I’m well trained enough not to stray. I’ve been thinking about this a lot. Our dog apparently thinks that her collar is the sole link to us as her family. When it has to come off for a bath or a vet visit, she is visibly upset and will only calm down when she has her beloved collar restored.

Am I becoming like her? Is wearing the chastity device an important sign that I belong to Mrs. Lion? On a subconscious level, do I, or for that matter, Mrs. Lion find comfort in me being locked up? I know she has said that she hardly notices it when I have it on, but she does notice when I don’t.

This is all about the value of being caged. I can’t say that it is about whether or not I remain wild. I don’t make that decision; Mrs. Lion has already determined I’m going back to captivity. It is about understanding exactly what purpose it serves.

In the three months I have been wild, Mrs. Lion hasn’t missed snuggling and teasing me. She gives me orgasms when she wishes. There has been no change in our sex life while I’ve been wild. I would like to know how Mrs. Lion views me when I’m wild. Does it matter to her at all if I am caged or not?

I know that the vast majority of men who wear chastity devices do so because they want to. Their partners keep them caged because they know it makes them happy. That was the case with us for the first year. I’m pretty sure that isn’t true now.  I don’t know how she feels. Is she locking me up again because she knows I want it? Do I want it after all this time? If I would rather be wild, will she lock me up anyway?

Without revealing how I feel about this, I would like to hear from my lioness. How do you feel about all this, Mrs. Lion.

[A few hours later when Mrs. Lion and I were together at home]

After I wrote my post, I usually write it the afternoon before it is released, Mrs. Lion sent me an email. She read what I wrote and said we should talk about the cage later. It’s now later. We briefly discussed it. Mrs. Lion asked me if there is any reason I don’t want to wear it? I said that there isn’t. I went on to say that the chastity device changes things for me in that an erection is impossible unless she releases me and provides it. She was silent when I said that.

She mentioned that I usually get unlocked for camper trips and when I travel for business. I mentioned that I have the custom nylon cage so I can wear it on trips. Mrs. Lion reminded me that my balls end up taking a bath in the trailer toilet when I sit to pee. That’s true. I said I think I have a way to get around that. I’m thinking that if I kneel in front of the toilet and pee without sitting, I won’t make a mess. So, she told me that I will be locked up again tonight. I assume she will have her key and I can be unlocked if peeing is a problem or she wants to play with me.

I still don’t know why Mrs. Lion wants me in a chastity device. I just know she wants me locked up. We know it isn’t behavioral. Why does she want it?

Since I am returning to captivity, I asked Mrs. Lion to be much stricter about cage wear. When she removes it, I asked that it go right back on when the reason for the removal has been satisfied. I am an all-or-nothing type of guy.