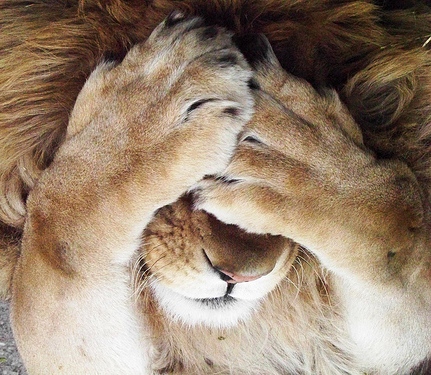 We have some errands to run and then I’ll try to fit in some manscaping. Lion is a very furry boy near his balls. Last time I only shaved him. I never made it to the light zapper hair remover. Lion uses a numbing cream that takes at least a half hour to become fully effective. It lessens his jumping from the light pulses that zap the hair follicles. I’ve only zapped my leg once to see what it feels like. Leg skin versus ball skin is definitely not apples to apples. I do know he jumps sometimes even with the numbing cream.

Other than laundry and cleaning up around here, I have no other plans for the weekend. I’m sure we’ll watch some old movies, snuggle and there will be time for Lion play of course. By Monday night he’ll be basking in the glow of another orgasm – oral I assume, in keeping with my New Year’s resolution. He’ll certainly enjoy some sling time unless his back hurts too much. I don’t want him straining himself. There are plenty of other ways to play with a Lion.