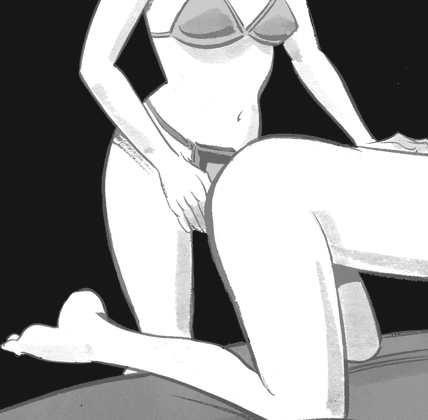 Mrs. Lion also tried a capsaicin rub. This product from England, is formulated like a stick deodorant. Just rub it on the desired area. Mrs. Lion chose my perineum. She rubbed a bit on. Then she masturbated me. After a few minutes, I reported that I didn’t feel any heat. She put more on the same spot. A few minutes passed. Still nothing. I told her and she tried one last time; this dose was quite thick. She reported she could smell it.

Again more teasing. This time, after a few more minutes, I felt some mild heat. “No big deal,” I thought. Mrs. Lion went on and the heat built very slowly. I was very aroused and Mrs. Lion was edging me mercilessly. She got me oh so close and stopped. I groaned. After about ten seconds, semen dripped out. I felt the ruined orgasm. Mrs. Lion calmly looked on. She cleaned off the semen, and released the restraints. I left the sling, gracefully for me, still dripping. I hate ruined orgasms. It is the purest expression of Mrs. Lion’s power over me.

Meanwhile, the heat was building between my legs. It was uncomfortable, but not unbearable. We went back upstairs to snuggle under the covers. The instant my perineum touched the sheet, the heat intensified, almost making me yelp. As I lay back, the pressure on my perineum lessened and the heat became a bit milder. The heat continued for almost an hour. Capsaicin is very different from menthol. The usual, menthol rubs start burning quickly and die out after about ten minutes. The capsaicin starts later and hangs on. You can’t wash it off, by the way. Taking a shower will make it worse.

She put my cock in her mouth and began moving. It felt as though I hadn’t come in a couple of weeks. I had to remind myself, I ejaculated the day before. What was going on? I soon found out. Mrs. Lion kept sucking and gave me a huge orgasm. She told me there was a good amount of semen. In the past, orgasms spaced less than three or four days apart would yield little-to-no semen. Maybe there is something to the idea that ruined orgasms don’t reset the sex clock.

The only explanation for this new development is that the Saturday ruined orgasm was classically perfect. Only a portion of my semen supply was drained. My body didn’t recognize that event as an orgasm. Overnight, I think the residual heat created by the unsatisfying end to our sexual activity, signaled something inside of me to make more semen.