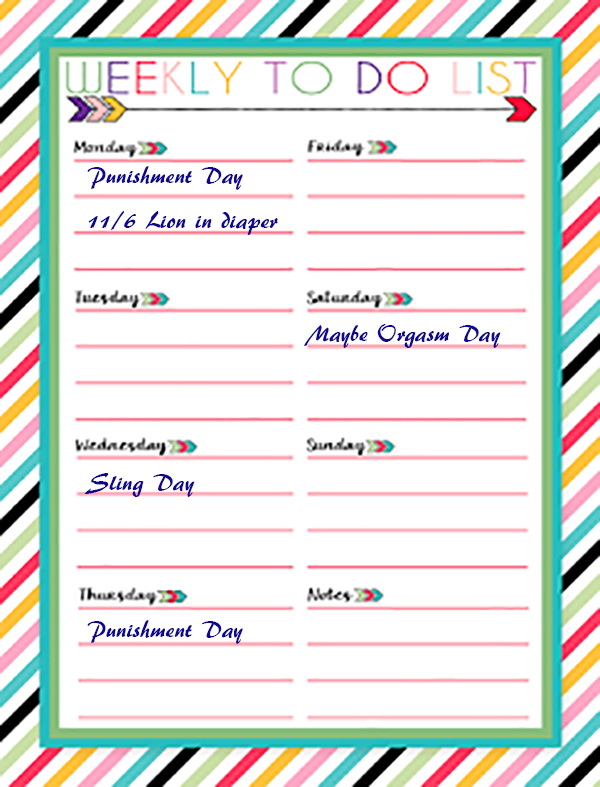 It may be easier to get Lion hard initially, but it isn’t necessarily easier to get him to the edge the first time. That’s okay though. I like Lion when he’s hard. He feels good. Hard and soft at the same time. His skin is soft but he’s hard inside, if that makes any sense. When he does get to the edge, he’s easier to edge the second, third, fourth, etc. times. And he stays hard. That’s useful if I decide I’m not really done with him after all. Sometimes I just like to hold him until he’s soft.

Today Lion is working from home. And he’s in diapers. Today’s rule is that he has to pee twice before he can change into a dry diaper. I guess it’s the best of both worlds. He’s wet for a while but he’s allowed to be dry for a while too. In the past I’ve made it so he was always wet. Sometimes I give him a break.

Yesterday I was going to make him wear panties. He was busy doing something and I went into his drawer where I thought the panties were but I couldn’t find them. I’m not one to rifle through his drawers. I figured I could ask him when he started getting dressed but I forgot. Last night when I told him about the panties he said I can go through his drawers whenever I want to. He has nothing to hide. I know that but I don’t like going through other people’s things.

Depending on how things go tonight, (there’s a repairman coming this afternoon) I was thinking about using the sling. Lion asked why I needed to make a specific day to use the sling. Well, it’s because I don’t think about using it. I need a way to bring it to the forefront of my mind. Assigning a day to it will make me more aware. It’s similar to punishment day. I needed a way to remember to punish Lion. Now I can punish him whenever I want to. I’m hoping sling day will have the same effect. Only time will tell.