By:
In: Lion's Journal, Spanking
With: 0 Comments 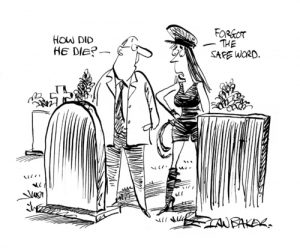 The other day, Julie, the blogger who writes Strict Julie Spanks, one of the most popular sexually-oriented blogs in the world, left a comment to Mrs. Lion’s “Sore Butt” post. I love Julie’s blog. It’s always sexy and fun to read. There’s a link to her latest post on the right side of all our pages. I am honored she reads the Journal.

Mrs. Lion wrote about my inability to accept as many swats as she considers appropriate for my punishment. Julie is famous for her extremely “complete” spankings. Her husband is deep red and bruised when she completes her work.  Her husband wants to be spanked, probably in the same sense I do. It seems like a hot idea until a few strokes into the beating, the pain makes it clear the spanking isn’t going to be either hot or fun.

Julie offered some very solid thoughts on how:

“I prefer the “Yellow” and “Red” safewords to these random whiny complaints of his. If he really wants it to stop then it’s Red and everything stops. If he wants to tell you that you are exceeding his limits, he may say Yellow. I always made it a game to get him to say Yellow, then back off a bit, and then get him to say Yellow again, and so on. Great way to test his limits. But there should be punishment for him saying Red when he is uninjured, perhaps a week without Domming, then two next time, and so on.”

The concept is brilliant. While you may argue that a punishment should provide no input by the spankee, the reality is that the kind of beating that Julie and Mrs. Lion favor is at the very edge of my ability to control myself. Yes, Mrs. Lion could gag me and tie me down before beating me. That sort of idea is best in fantasy. The reality is emotional and physical trauma.

Allowing me to moderate the intensity doesn’t change the behavior-changing result of the punishment. It won’t make me want another punishment spanking. It will train me to accept longer and harder spankings. There are two objectives to disciplinary spankings: Create a very painful consequence for misbehavior, and provide a lasting reminder of the punishment. The pain isn’t reduced by my calling, “Yellow”. It just serves to help extend the spanking by keeping each swat within my ability to handle it. The cumulative pain will probably be worse because Mrs. Lion will be able to keep going much longer. I think that’s Julie’s point.

If I call Yellow and the reduced intensity is still too much at the moment, a Red call isn’t needed. I think I should call Yellow again. As Julie says, she prefers Yellow and Red to other whiny complaints. Me too. It’s clear communication of how I am handling the beating. Great suggestion, Julie. Thanks.