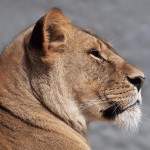 By the time I got around to spanking Lion, it was after dinner. He didn’t like the idea of being spanked after dinner. Too bad. I worked late, we both fell asleep watching TV, and then I made dinner. It was the first chance I had to swat him. Sure, I could have given him a pass, but he breaks rules so seldom anymore and I almost never punish him for interrupting. I had to follow through.

I strapped him down more out of habit than anything else. I guess it’s a good thing because he hasn’t had many punishment spankings lately. He was bound to move. Or rather, he was bound so he wouldn’t move. I was free to swing away.

I used a variety of paddles. I’m not sure which ones hurt more. I bet Lion isn’t, either. He yelped a lot although I wasn’t even hitting as hard as I’ve hit him in the past. I did quite a few hard swats, with time in between for the insult to sink in. By the end, his butt was a little bloody. It stopped bleeding as soon as I wiped it off. Today he reports that it hurts to sit. I’d think so. It was a good spanking.

Aside from weenie’s attention, I’ll continue to put my iPad down to give Lion attention. This weekend I’ll clean the living room and insist we give my idea of watching TV in the living room to keep him awake a chance. It may not work, but I’d like to try it.

When I started to list off our lunch choices, Lion interrupted me. I guess he wanted to extend his punishment day spanking to the full ten-minute real punishment. He said he didn’t know he was interrupting. Obviously. I hope he wouldn’t do it intentionally unless it was something important like my hair being on fire. But he did it and now must deal with the consequences.

In this morning’s post, Lion talked about my iPad usage. He’s complained about this before and I cut down a lot. Then, I’d be watching TV, holding his hand, and he’d be snoozing. Sometimes he’d snooze while we were snuggling. When I brought that up, he said it shows how comfortable we are with each other. I guess that’s true. Sometimes I fall asleep while we’re snuggling. On the other hand, isn’t his falling asleep and leaving me watching TV sort of the same as me being on my iPad leaving him watching TV?

He’ll say he doesn’t intentionally fall asleep. He’ll say that I can wake him up. I believe he doesn’t do it intentionally. However, it doesn’t always work when I try to wake him. Other times, he wakes up but goes right back to sleep. It wasn’t really a quid pro quo, but I decided to use my iPad while he slept, and then it just became habit to always use it again. I went overboard. I can reel it back in.

As far as Lion’s snoozing is concerned, I know “old” people fall asleep in front of the TV all the time. I don’t know if there’s a solution to Lion’s naps. I know. He’s a big cat and big cats sleep a lot. I wondered, a few posts back, whether sitting in the living room would curb his ability to fall asleep. If I remember correctly, he’s said he doesn’t like to use the living room because it’s not comfortable. Maybe that’s precisely why we need to use it. Maybe he won’t fall asleep so often if he isn’t comfortable. I’m sure it will take some getting used to, but the couch isn’t that bad. It’s a loveseat so we’ll be closer together than in bed. There’s no gap between the cushions.

What do you think, Lion?

I forgot I have to make up an hour a day at work because I left early for Lion’s doctor appointment on Monday. I had just made a mistake and was asking for help when Lion wondered what time I was planning on spanking him. I realized then it was already 4:30, but I needed to fix my mistake. Then I remembered I had to make up time. I was stuck until 5:30.

As soon as I finished repairing my boo-boo I could spank him so he could shower. He decided to put off his shower because I said I was going to slather him with lube. I was really only going to use it on my weenie, but he opted for a shower after the festivities anyway. I don’t usually take an afternoon break so I snuck away for five minutes to give him his punishment day spanking. That way he had a little while to recover. He doesn’t really need much time. It’s not like it’s a full punishment spanking.

After work, I set up the massage table. Rather than using lube, I decided to use the same oil I use for waxing. If Lion was showering anyway, he could get rid of the oil easily. I think it’s slipperier than lube too. Before I got that far, I rubbed him all over. I don’t think it did anything for him, but I liked feeling close to him. Of course I spent some time on weenie and the boys.

When I thought he was ready, I oiled up my hands. One good thing about slippery hands is that I couldn’t pinch his nipples. He hates when I do it so he was happy to have that off the table. And he was glad to have my slippery hands on my weenie.

Whether I use lube or not, I have a problem keeping my strokes even. The other day I went too slow to keep him interested. Too fast is no good either. GoldiLion likes it just right. I get caught up listening or watching for cues that he’s getting close, and I don’t realize I’ve sped up or slowed down. I must have been doing something right because he had a nice orgasm. He even gave me some cream filling. Oil be damned, I lapped it up.

True to form, we didn’t play last night. We got home from Lion’s appointment and I started doings things around the house. Lion watched TV while waiting for the dilation drops to wear off. Two things needed to happen that were time sensitive. Well, three, but two absolutes. I needed to get the garbage out to the curb and I needed to change the bed. Obviously, I can’t change the bed with Lion in it, so that waited until he was in the shower. The third thing, that only occurred to me after I made the bed, was that it was punishment day. If I swatted him when he got out of the shower, then we couldn’t play. If I didn’t swat him, I’d be breaking another promise. So, I did what I always do when faced with a decision with no winners, I did nothing. Actually, that’s not entirely true. As I was heading to make dinner, I told Lion I was postponing his spanking to today so we could play after dinner. He told me we didn’t have to play. See? No winner.

For days, I’ve been thinking about jerking him off with lube. I’ve also been thinking about rubbing the lube all over him. Of course, that’s a bit too messy if he’s just had a shower. I don’t even know if he’d like to be rubbed/massaged all over, much less with lube. We’re not really touch-feely people. I could always do it anyway. He’ll just have to suffer through having me touch him all over.