Should I Be Locked Up Again? 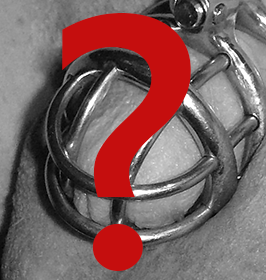 Wearing a chastity device is clearly my thing. Mrs. Lion has said that if I want to wear it, she would put it back on me. I got the feeling that if I then decide I am tired of it, she would unlock me. She doesn’t see that it has any particular value in our power exchange.

I’m trained and that’s it. I would have a hard time changing. This brings up a critical male chastity premise: A male will get sexual satisfaction without his partner unless physically restrained. I’m sure there are guys who actually need to be locked up to avoid “mistakes”. I wonder how their partners feel about this.

The essence of our power exchange is my surrender. Yes, I accept punishment for failing to obey one of Mrs. Lion’s rules. I don’t try to break a rule. I feel strongly that the essence of our agreement is my willing submission. Punishment is used to focus my attention on changes I need to make. It isn’t meant to be an activity to correct willful disobedience.

My fantasies have me resisting authority and then strongly disciplined for my disobedience. In my mind this is very hot. However, in real life it hasn’t turned out that way. I find myself working hard to obey, even when I truly hate what I have to do.

In any case, wearing a chastity device has no place in our power exchange. If Mrs. Lion wants to punish me by withholding sexual attention, the device isn’t necessary to keep me from taking things into my own hands. I won’t do that. She knows I won’t. It would be a serious betrayal if I did.

I think I want to be locked up. But if I control whether or not I’m caged, it feels a little silly to me. The only real value the device could have would come if once locked up, I lose the ability to be unlocked. Even though wearing a cage is unimportant to Mrs. Lion, she would have to strictly enforce my lockup for it to satisfy my fantasy.

If Mrs. Lion locks me up, I want the chastity to be strict. Since I have a comfortable nylon device, I could remain locked even when I travel. I want that. My thought is that since being caged is something I might want (I’m still not sure I don’t want to stay wild), once locked up, I lose any chance to be wild when unsupervised. If I get an emergency key, I want it to be as inaccessible as possible.

It’s a tricky situation. I would only be caged because I ask for it. This is no different than when we first started and Mrs. Lion locked me up. The tricky part is that since she has no real investment in whether or not I wear a device, she would have to decide to make it important. Only when being caged is as important to her as the rest of our power exchange, would it reach me as something I might have wanted, but now she owns.

Well, that’s how I think about all this. Just as I wrote over four years ago, once Mrs. Lion agrees to lock me up, I lose any ability to control the device’s use. The keys are hidden from me. The lockup can’t be symbolic with the key sitting on Mrs. Lion’s nightstand. For me, at least, it needs to be real. That’s why I don’t want an emergency key. I want to feel that I have absolutely no way to release myself.

That’s my view. The reason I get excited about being caged is that It prevents any way for me to access my penis. Any ability to get the key destroys that. For me, at least, as long as I have any ability to unlock myself, the feeling of bondage isn’t the same.