By:
In: Mrs Lion Comments, Punishment
With: 2 Comments 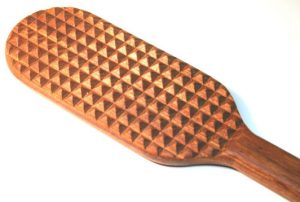 I wasn’t feeling well last night. I was trying to concentrate on feeling better and didn’t anticipate any Lion play. Lion was disappointed because he wanted Lioness play. Maybe tonight.
Eventually we had some ice cream with hot fudge. Hot fudge is always good to cure what ails you. That’s my theory at least.

Unfortunately, Lion dropped some hot fudge on his shirt. He’d made it quite a few days without requiring punishment. Oh well.When I’d gotten the ice cream bowls out of the way I chose a paddle for Lion’s swats. He made a face when I told him to roll over. I was debating whether this should be a short punishment since his only crime was spilling hot fudge. No big deal really. But then I decided I couldn’t go easy on him. He keeps commenting that I stopped too soon. Even though I think the punishment should fit the crime and a small offense should have a small punishment, I can’t not give him a long spanking.

I started out slowly and built up as his buns got rosy. Every so often I slipped in a harder swat or two. Sometimes more than two. Then I flipped the paddle over. I’d chosen the tenderizer paddle. One side is flat. The other side has raised diamond shapes like on a meat tenderizer. I swatted lightly at first and built up to harder swats. Eventually he had little dots of blood on one of his cheeks. I flipped the paddle back to the flat side and continued.

Lion whimpered and asked me to stop a few times. He tried to get away and I waited for him to roll back. Once he rolled so far I was able to tap his balls with the paddle. If he doesn’t want his butt swatted anymore, perhaps he’d like his balls swatted. He didn’t. I didn’t think he would.

I swatted far longer than I normally would have. I’m sure he’ll still say I stopped too soon. I knew his butt had to be on fire. When I put the paddle away, I closed the bedroom door and invited him to stand in the corner. I didn’t tell him how long he’d be there. I only told him that his buns were very rosy and one cheek had droplets of blood on it.

When we were in bed he said he was a poor Lion. I’d really hit him hard and his butt was sore. I told him I’d only given him love taps. He snorted. It’s true. If I didn’t love him I never would have swatted his butt for him. He couldn’t really argue with that.

Then I suggested getting a stool so he didn’t have to stand in the corner after a spanking. However, the stool would be covered in the rough tread tape we have so, while his legs would have a break, his sore tush would be even more uncomfortable. Everything has its price.