Did You Ever Notice? 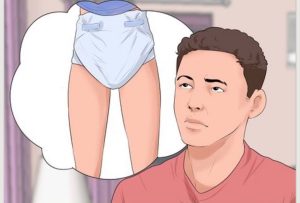 If Lion has behaved himself, by the time this post publishes he will have finished his twenty-four hour diaper punishment. Ironically, I think it was the add-on punishment of no sex that bothered him more. Maybe not. He really does hate diapers, especially wet ones.

The other day was my first foray into alternate punishment. As far as I can remember I’ve never used diapers as a punishment. I certainly never used sex, or lack thereof, either. I just couldn’t see spanking Lion for the third day in a row on an already-sore butt. I’m sure he would have been fine, but it seemed a bit excessive to me. I know he doesn’t like diapers. Up till now I’ve used them to make him feel uncomfortable, to show him who’s boss. He’d wear them under whatever parameters I set, and then he’d be done. It was, like a butt plug, a set it and forget it form of play.

Because we were close to the weekend, I knew he could wear the diaper without anyone knowing about it. He wouldn’t be squirming through a meeting in a wet diaper. If there was a smell, no one else would notice it. I bet he could have worn them to work. I didn’t notice any smell. He even announced he’d be working from home Monday if I wanted him to continue with the diapers. I know he said twenty-four hours is not sufficient time for punishment, but I like to take baby steps. Next time he may wear them longer. Who knows?

The no-sex aspect was an afterthought. In the past, if he was mid-diaper-wearing session, he’s washed off and I’ve played with him before he goes back into the diaper. Of course, in the past the diaper wasn’t a punishment. And I started thinking about how warm and stinky it would get in a wet diaper and decided I wanted no part of it. Hence, no sex. I don’t usually make him wear a diaper to bed either because he gets too hot at night. I did this time. There were all sorts of changes with this punishment.

Did you ever notice that 2.0 shows up just after Lion accuses me of not wanting to play anymore? I think she wants to make him eat his words and then she fades into the background again. She really needs to stick around longer.